गृहपृष्ठ » Headlines » The shooter left thinking I was dead, had I worked in harmony, I would not have been alive today: Imran Khan

The shooter left thinking I was dead, had I worked in harmony, I would not have been alive today: Imran Khan

New Delhi . Former Prime Minister of Pakistan Imran Khan has made a big claim about the deadly attack on him. Khan said that the two attackers whom I saw attacking myself, if they had acted in harmony, I would not have been alive today. Khan was shot during a protest march in the eastern city of Wazirabad. According to the BBC report, in his first public address since the attack, he said this while sitting in a wheelchair in the hospital. 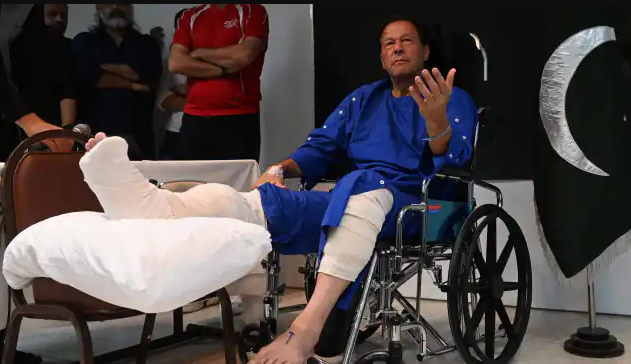 Imran said, ‘…Because I fell, one of the attackers thought I was dead and left from there.’ At the same time, in a video released by the police, the arrested accused confessed to his crime. The man accused of shooting Imran said that the former cricketer was misleading the people and for doing so he wanted to kill him. After all, under what circumstances the attacker made this confession, it is not clear.

Was informed about the attack: Imran
According to the report, Imran Khan also said that he had come to know about this a day before that he was going to be attacked. Addressing the nation from inside the hospital, Khan said, ‘I had come to know a day before that I would be attacked. In the deadly attack on me, 4 bullets were fired in the right leg.

‘2 gunmen opened fire’
When Khan’s convoy, which was marching against the country’s Shahbaz Sharif-led government, reached Punjab’s Wazirabad district on Thursday, two gunmen opened fire on his container-truck. Khan was shot in the right leg in the attack. Talking about the deadly attack on him, Khan said that he was in the container when bullets were fired at him, he was shot and he fell down. He told that then the second shower (of bullets) came, there were 2 people.