Kathmandu. The Millennium Challenge Corporation (MCC) Compact has been published in the Nepal Gazette, the government’s official bulletin.

With this, the project considered a milestone in the development of energy and infrastructure sector of Nepal has formally come into the implementation process.

The U.S. Government’s Millennium Challenge Corporation $500 million compact with the Government of Nepal was ratified by the Federal Parliament on February 27, 2022. It was ratified along with a 12-point interpretative declaration after a long political dispute and differences. The government and the MCC had signed the agreement on September 14, 2017. 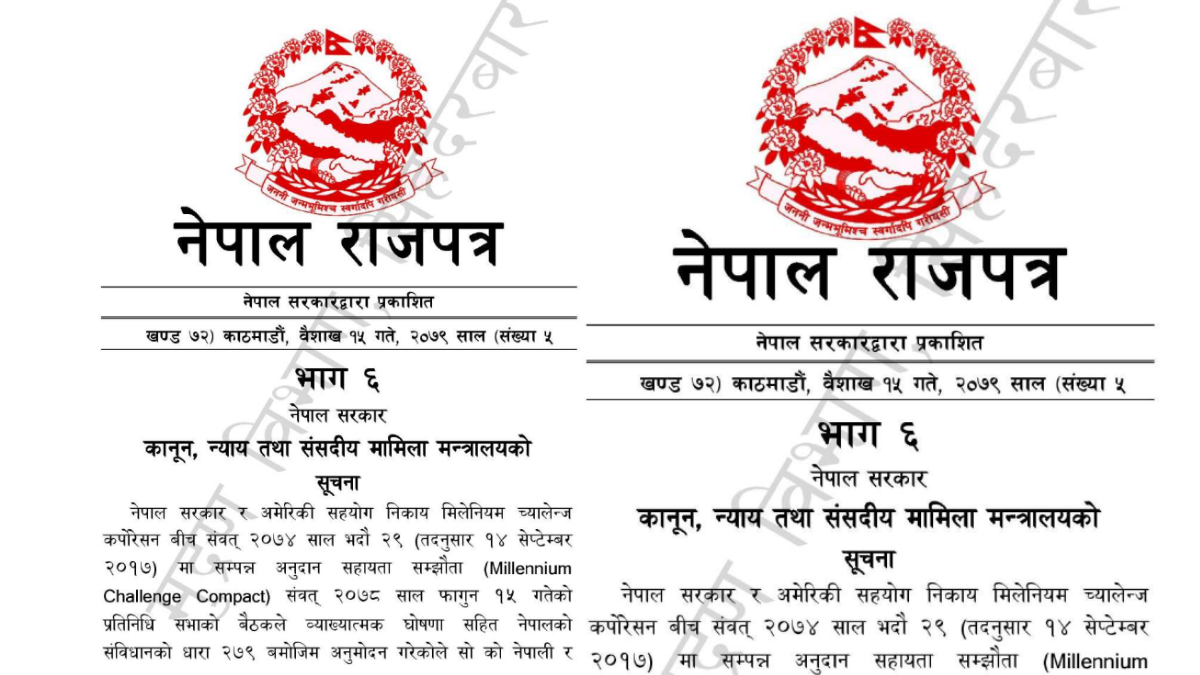 The compact aims to maintain road quality, increase the availability and reliability of electricity, and facilitate cross-border electricity trade between Nepal and India—helping to spur investments, accelerate economic growth, and reduce poverty.

A total 312 kilometres electricity transmission line of 400 kV capacity and nearly 100 kilometres road would be constructed with the grant assistance under MCC.

The Compact has been ratified in line with Article 279 of the Constitution of Nepal and its authenticated copies in the Nepali and English language have been published in the Gazette for the purpose of Clause 12 of Nepal Treaty Act, 2074 BS.

Increasing the consumption of electricity through the improvement of electricity availability and stability in the power grid of Nepal by facilitating the energy trade and maintaining the standard of the road in the strategic road network are among the objectives of the project.
As per the agreement, MCC will provide 459.5 million USD. Apart from the financial management, US government will provide additional 40.5 million USD to Nepal.

The 400 kV double circuit transmission line at Nanglebhare of Kathmandu district links New Butwal substation in Butwal through Ratmate of Nuwakot and Damauli of Tanahun. Similarly, under the project, another transmission line goes through Galchhi in Dhading district and Hetauda in Makawanpur district.

All the preparedness for the project with a five-year completion deadline has moved forward, according to the MCA Nepal. A laboratory related to quality of road construction at the Department of Roads has been set up some days ago.

Similarly, the process of the use of forest lands and the distribution of compensation for acquiring them as per the environment impact assessment report has been underway. Land acquisition at Ratmate in Nuwakot has been completed.