Melamchi Bazaar . Melamchi Bazaar and adjoining areas in Sindhupalchowk district suffered a massive loss due to incessant rains that resulted in landslides and rampant river erosion.

A team of experts from the Department of Mines and Geology was send for a study in the Melmachi Bazaar which was hit by the devastating floods on June 15 and July 31. 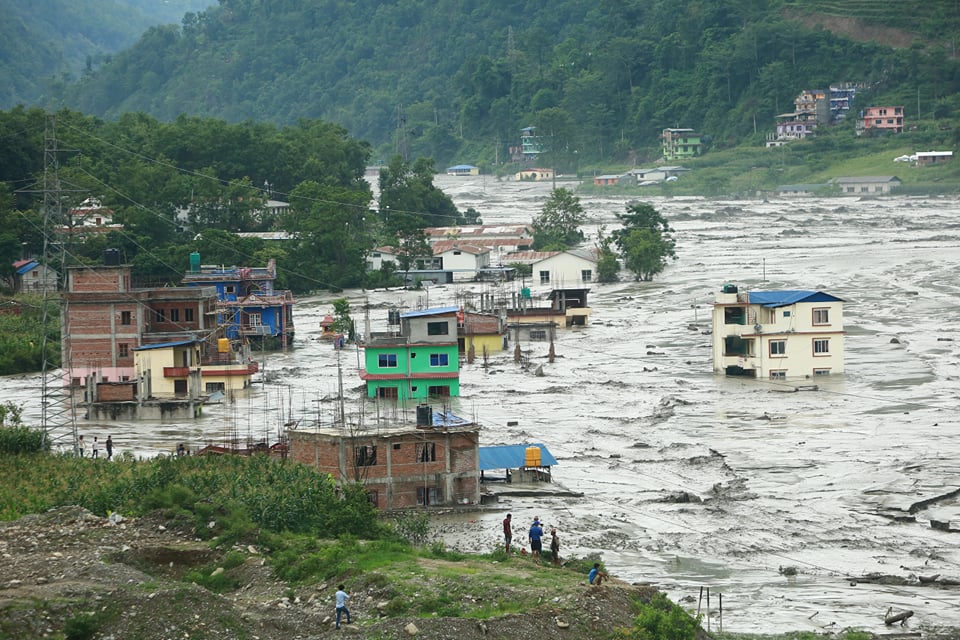 The team comprising Department’s senior divisional geologist Shiva Kumar Baskota and geologist Gautam Prasad Khanal had been in Melamchi and Helambu area from August 6 to 19 to find out the cause (s) of the disaster there.

Floods started from the confluence of Pemdang Stream and Melamchi Stream following the incessant rains on June 15 got blocked at one point of the Melamchi River and it turned more violent as it got mixed with landslide deposition, causing further river erosion. As a result, the Melamchi Bazaar and adjoining settlement suffered a significant loss, according to senior divisional geologist Baskota.

Indrawati, Melamchi, Pemdang, Larke and Yangri Rivers which flow through the Melamchi Bazaar are the Himalayan rivers. The floods had their serious implications in Chanaute Bazaar, Kiul Bazaar, the centre of Helambu rural municipality, Ambathan, Timbu,and Gyalthum.

The June 15 flood in the Pemdang River had led to the accumulation of sediment up to 10 metres at Bhemathang Chaur (ground) in Helambu. The sediment is measured at 10 million cubic metres, the Department said. The length of the ground is 1,500 meters while the width is 700 meters.

“The deposition of 10 metres thick sediment over that ground makes clear the sheer size of the precipitation and flooding in that area,” Senior Divisional Geologist Baskota said. The Bhemathang pitch which was filled with the sediment on June 15 has been eroded by the heavy rainfall on July 31.

According to him, the massive flooding in Melamchi on July 31 was triggered due to the erosion of 100 metres area of the Bhemathang pitch.

Department’s Director-General Ram Prasad Ghimire said the conclusion of the geological study carried out in the Melamchi and Helambu would be handed to the National Disaster Risk Reduction and Management Authority (NDRRMA) under the Ministry of Home Affairs.

“It is necessary to conduct the geological study of all areas and not just Melamchi and Helambu so as to prevent such incidents from occurring again in the coming days,” DG Ghimire said.

More than a dozen people lost their lives due to the flooding on June 15 and July 31 in Helambu and Melamchi while billions of rupees worth of physical infrastructures were destroyed. About a dozen RCC and other bridges were damaged in the areas.

Hundreds of houses near the bank of the Melamchi rivulet are at risk. Although the government assigned a two-member team from the Department for carrying out the geological study of Melamchi and Helambu area, the NDRRMA under the Home Ministry had mobilized three employees for assessing the disaster risk in that area.